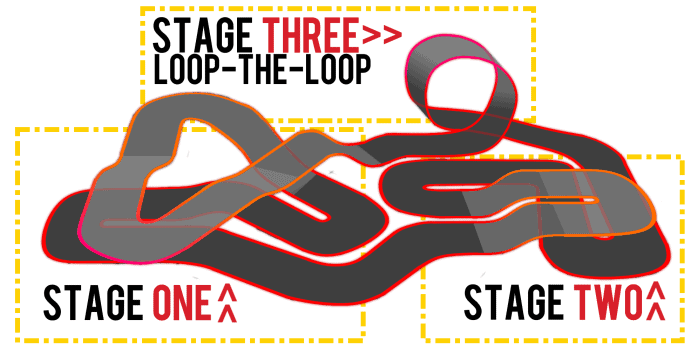 Slideways forever changed the local go karting scene with the opening of the southern hemisphere’s first three level track, Slideways Go Karting Gold Coast, which has seen record crowds flock to the Nerang venue since it opened for business 12 months ago.

The latest announcement regarding the Brisbane venue, at 870 Kingsford Smith Drive Eagle Farm, finishes off the venue’s current renovations, which has recently seen the massive stage one completed in time for school holidays.

The Loop-the-Loop is made possible by Slideways’ high powered hire karts, that are capable of propelling drivers up to 130kg around the 20-metre-high loop, which has been designed by engineers to keep the karts firmly glued to the track.

The recently opened renovated section of the track features a new outdoor loop into the car park, as well as an elevated structure featuring two fast corners, and a pair of down ramps, which propel the European racing karts to the necessary speed to successfully conquer the loop.

A feature of the track will be a ‘chicken lane’, for those not feeling brave enough to take on the Loop.

“At Slideways we have grown a reputation around the world for building the wildest tracks, and the Loop-the-Loop will absolutely knock go karting out of the park!” Said Slideways Director Cam Wilson, a twice Guinness World Record holder for endurance karting titles.

“With our three-level track at Nerang, we found that we had the engineering ability to make the Loop-the-Loop work, and our karts are absolutely the best in the business, they won’t have an issue making it to the top.

“The Slideways philosophy is all about having fun! Our karts drift on our indoor tracks at speeds up to 70km/h, which puts us in another league compared to bland old traditional flat tracks.

“We know that everyone will love our renovations, but the Loop-the-Loop will make us an even bigger tourist attraction!”

Slideways Go Karting Brisbane is open 7 days a week from 10am – 10pm.